The study of metal-insulator transitions in VO2 through atomic scale imaging has allowed to uncover a periodical tweed structure: a weaving of vanadium dimers acting like the threads of an actual tweed at the atomic level. This research, led by ICMAB researcher Felip Sandiumenge and ICN2 and ICREA researcher Gustau Catalan, and published in Advanced Materials, provides relevant information for the understanding of transitional states in specific classes of materials.

Fourier-filtered electron microscopy image showing phase coexistence between M1 phase and the newly discovered x3M phase, with the two phases weaving across each other forming a “tweed” pattern

Transitions from metal to insulator behaviour, occurring in various materials when some ambient parameters are modified, have great importance because of their potential application in electronics, as well as in smart coatings for windows that change from transparent (insulating) to reflecting (metallic) as outside temperature increases. Such abrupt changes in the electrical conductivity are found in some transition-metal oxides and semiconductors, as well as two-dimensional and topological materials. This complex phenomenon, however, is not yet fully understood and is often accompanied by variations in the structural or magnetic symmetry of the material itself.

A well-known example of a system undergoing metal-insulator transitions (MITs) is vanadium dioxide (VO2), which at temperatures of about 340 K passes from a tetragonal metal into a monoclinic insulating phase. A study recently published in Advanced Materials has uncovered that in VO2 thin films the MIT is characterized by the formation of an intermediate tweed texture: a newly-identified monoclinic phase forms atomic chains that weave across each-other, generating a fabric-like texture within the periodical structure of the crystal lattice. This work was led by Felip Sandiumenge, from the Institute of Materials Science of Barcelona (ICMAB), and by ICREA researcher Gustau Catalan, from the Catalan Institute of Nanoscience and Nanotechnology (ICN2).

By means of advanced atomic scale imaging techniques —specifically, high-resolution transmission electron microscopy (HRTEM) and electron energy loss spectroscopy (EELS)— the authors of this research were able to study the crystallographic and electronic structure of VO2 films of different thickness. The thinner (40 nm-thick) sample image showed a monoclinic phase composed of “diluted dimers” (pairs of vanadium separated by an unpaired atom) forming chains that created a tweed texture made of interwoven fringes, corresponding to different orientations of this phase. Interestingly, despite the internal monoclinic symmetry, the average shape was rutile-like (which is tetragonal) and metallic, which may explain why this phase may have been undetected before –macroscopically, it just looks like the standard high-temperature metallic phase of VO2. The length scale at which this structure was observed is below the resolution limits of standard X-ray spectroscopic imaging techniques. A similar structure appeared on the images of thicker (80 nm-thick) film as well, but with additional complexity brought about by co-existence of both monoclinic and rutile phases in the film.

Though tweed textures have been observed before in structural phase transitions, it is the first time that they are seen in the electronic metal-insulator transition of VO2, a paradigm of such transitions. These results offer a new interpretation for how the dramatic change in electronic structure and lattice symmetry across the phase transition can be bridged with mesoscopic structures, mixing aspects of both the metallic and the insulating phase at different length scales. 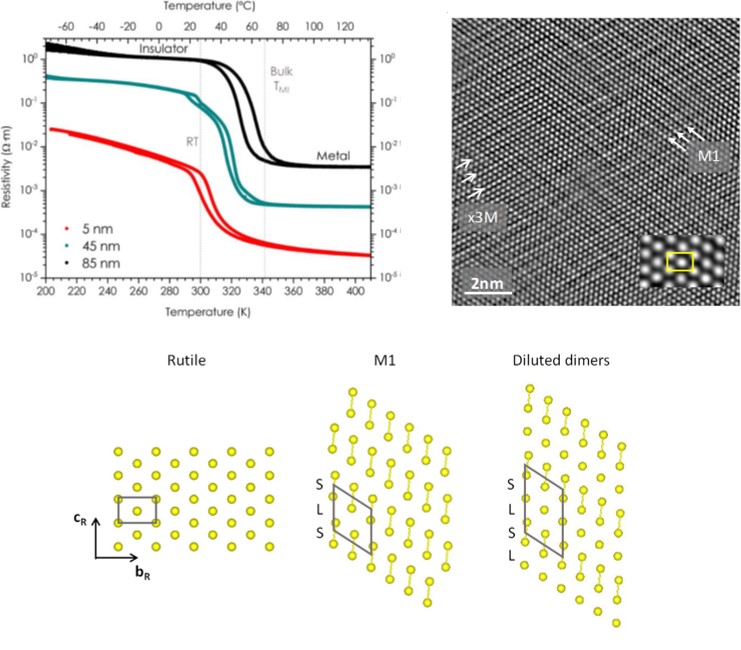 (Top left): Electrical resistance as a function of temperature for VO2 films of different thickness. There is a transition from a high temperature metallic state to a low temperature insulating one, with a hysteretic phase coexistence region in between; (top right) Fourier-filtered electron microscopy image showing phase coexistence between M1 phase and the newly discovered x3M phase, with the two phases weaving across each other forming a “tweed” pattern; (bottom): Schematic arrangement of the vanadium atoms in the rutile (metal), monoclinic (insulator) and x3M phase (diluted-dimer, metal).