Press Release: Superconductors instead of copper for the future circular collider (FCC) at CERN

On the 4th of July of 2012 scientists at CERN announced the discovery of the Higgs boson based on collisions detected in the ATLAS and CMS detectors in the large hadron collider (LHC). The Higgs boson is responsible for the origin of mass of subatomic particles, and is an essential component of the Standard Model, one of the most successful theoretical frameworks in physics. Thanks to this discovery, on the 10th of December of 2013 F. Englert and P. Higgs were awarded the Nobel Prize in Physics for their theoretical prediction in 1964.

The LHC has proven fundamental to the advanced of our knowledge of matter and the Standard Model. However, the 13 TeV center-of-mass collision energy it produces cannot explore newer key questions about the Universe, such as dark matter and dark energy (which together form 95 % of the Universe), supersymmetry, the origin of neutrino masses, or the existence of extra dimensions. Higher energy collisions are needed. To this end, the future circular collider (FCC) study explores options for a next generation of hadron-hadron collider, which should succeed the 27 km-ring LHC at the end of its productive life. The FCC aims at 100 TeV center-of-mass proton-proton collision energy in a 100 km circumference ring located near the CERN site.

Superconducting magnets cooled at very low temperatures (1.9 K), generating a very strong magnetic field of 16 T (1,600 times more powerful than kitchen magnets), are needed to steer the proton beam inside the FCC. The accelerated protons circulating through the FCC tunnel lose energy in the form of synchrotron radiation (28 W/m/beam), which could heat the magnets if they were not properly protected. A stainless steel beam screen shields the magnets from this radiation, thus allowing for a better cryogenic efficiency and power consumption.

In addition, another consequence of the accelerated particles is the formation of image currents in the beam screen. These image currents produce electric fields that could destabilize the proton beam and hinder the desired fruitful collisions. To prevent this phenomenon from happening, the 27 km beam screen at the LHC is held between 5 K and 20 K, and is covered with copper coating. At this low temperature, copper has a very low resistance, thus minimizing the electric fields created by the image currents induced by the accelerated protons. 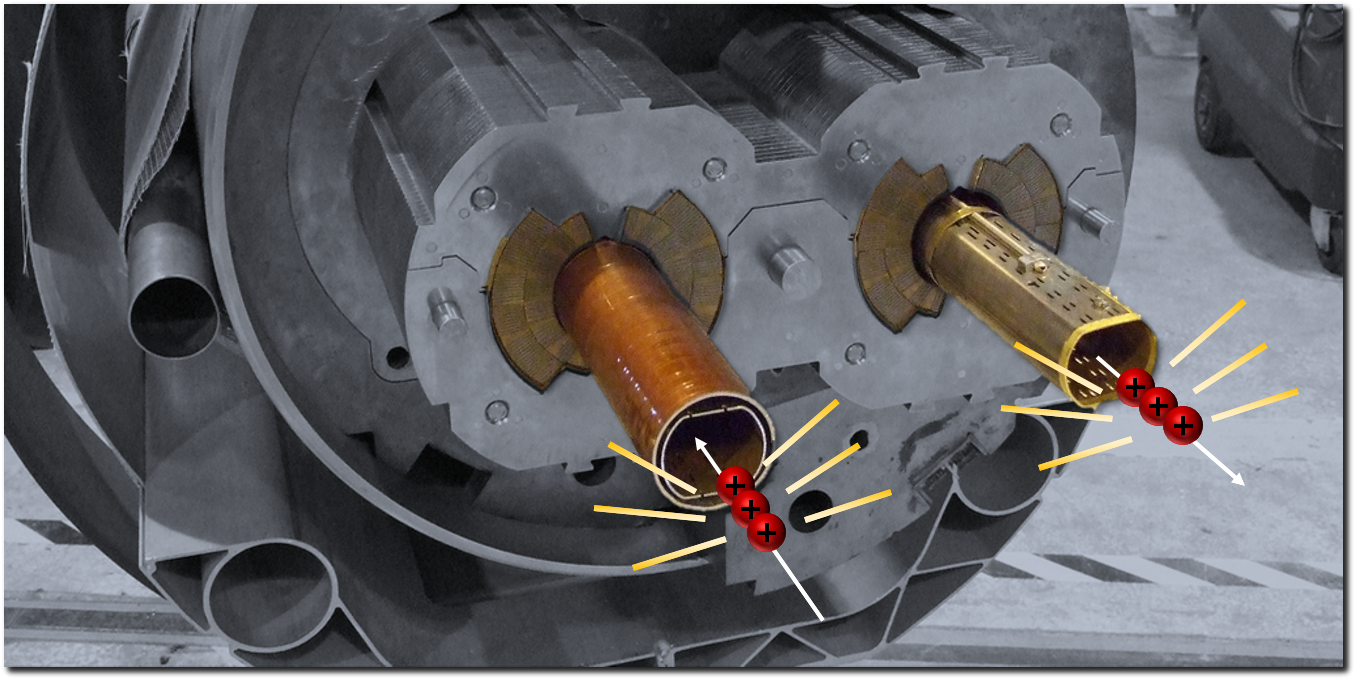 However, it is not feasibly nor economically possible to keep the FCC at these low temperatures: the FCC is much longer (100 km instead of 27 km), and the intensity of the synchrotron radiation generated by the particles is 100 times more powerful in the FCC. Therefore, much more energy should be needed to keep the temperatures that low and, eventually, an unaffordable energetic and economic cost.

The window range in which the FCC should work is between 40 K and 60 K, and at this temperature range, the surface resistance of copper might not be sufficiently low to ensure stable operation of the FCC. Which material could be used at this range of temperatures, which has a low resistance (high conductivity) and that could coat the FCC beam screen easily?

Scientists from the Superconducting Materials and Large Scale Nanostructures (SUMAN) group at the Institute of Materials Science of Barcelona (ICMAB-CSIC) have proposed a solution to this challenge: coating the beam screen chamber with a high-temperature superconductor instead of copper. High-temperatures superconductors of the type REBa2Cu3O7-x (where RE is a rare earth metal, such as Y (yttrium) or Gd (gadolinium)), are produced worldwide as flexible materials in hundreds of km length and could be ideal candidates. Scientists from the SUMAN group have a long track record with them.

Scientists within a consortium made by the ICMAB, ALBA, IFAE and UPC have demonstrated that high-temperature superconductors are capable of outperforming copper’s surface resistance by a factor of 40 or more under those conditions to be found in the FCC. “In addition, we are already developing a technology that will enable to coat the interior of the 100 km circumference ring of the beam screen chamber of the FCC with REBa2Cu3O7-x coated conductors instead of copper” explains Joffre Gutiérrez, ICMAB researcher participating in the study.

The FCC Study, hosted by CERN, is an international collaboration of more than 150 universities, research institutes and industrial partners from all over the world to explore concepts for the most powerful particle collider and develop enabling technologies.  The study will elaborate on different possibilities for circular colliders, new detector facilities, the associated infrastructure, cost estimates, global implementation scenarios, as well as appropriate international governance structures.

Download the press release in CATALAN, SPANISH and ENGLISH here.