The ICMAB hosted this year four students from the UAB Argó Program, from June 25 until July 11, 2018. During their final day they presented their projects on "Synthesis and characterization of gold nanoparticles" and "Synthesis and characterization of an oxide thin film", which they carried out in our Scientific Platforms with the help of many of our technicians and research staff.

Once again, the UAB offers high-school students the possibility of doing a research stay at the UAB or in one of the research centers of the Campus UAB, to get to know the tasks that are usually carried out in laboratories, departments,or research institutes.

The ICMAB has been collaborating with the Argó Program and hosting students since 2011. The stays provide students with first-hand guidance and advice from the researchers and technicians of the center, as well as the possibility to interact with the researchers and explore the scientific activities they carry out. 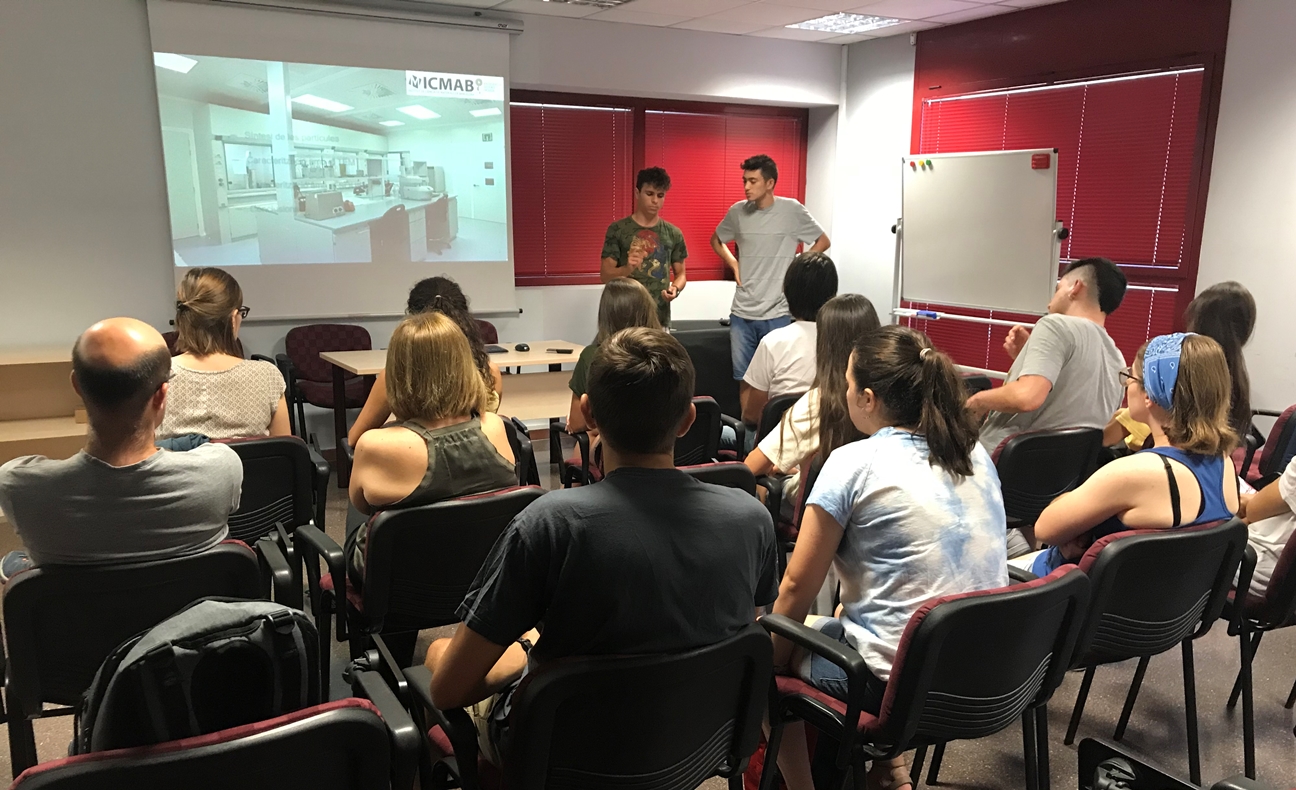 At the ICMAB, the students learnt some of the techniques used by researchers to characterize the materials they synthesize, such as transmission and scanning electron microscopy, atomic force microscopy, magnetometry and X-ray diffraction.

The technicians Judith Oró (TEM), Ana Esther Carrillo (SEM), Bernat Bozzo (magnetometry), Maite Simón (AFM), Anna Crespi (XRD) and Joan Esquius (XRD) were in charge of organizing the different activities and sessions. Miquel Torras, from the NN group, helped them in the microwave-synthesis of gold nanoparticles in the Nanoquim Platform, and Lluís Balcells, from the ACNM group, the synthesis of the oxide thin film, with the sputtering technique. 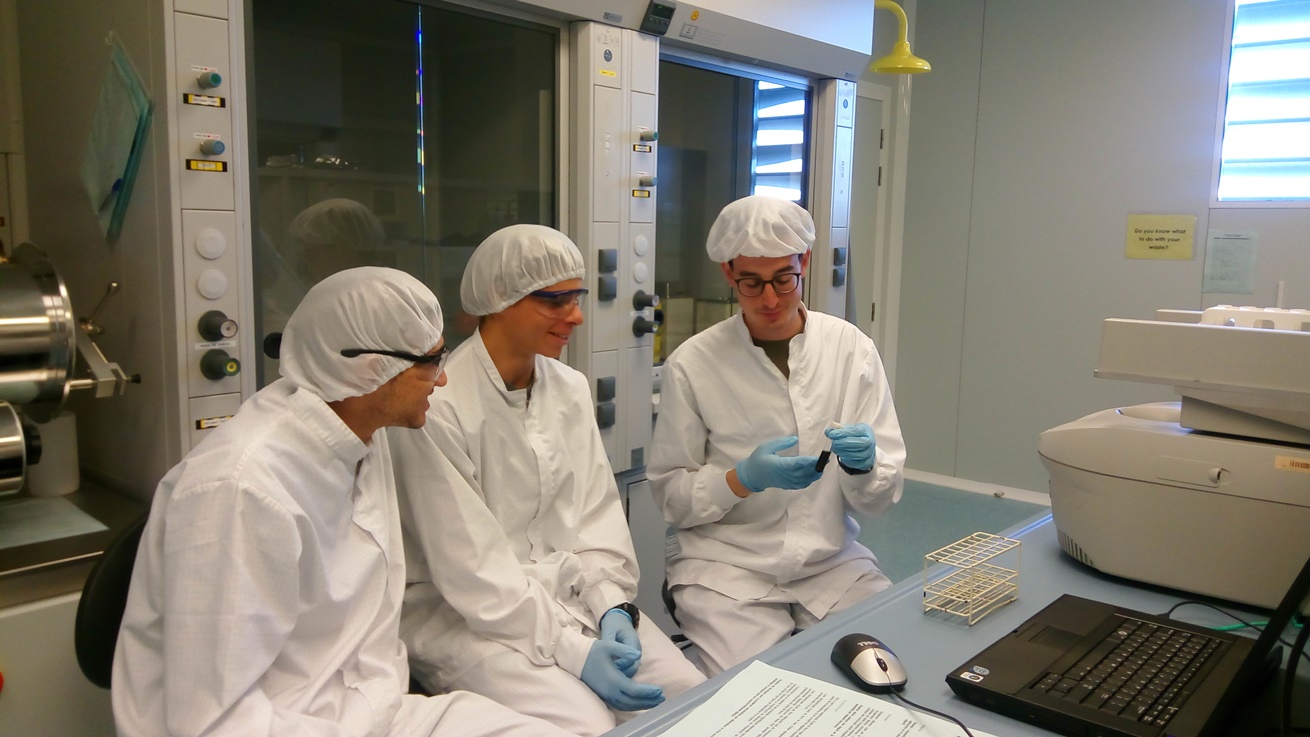 Anna May-Masnou and Roberta Ceravola gave them the initial talks, a short presentation of the ICMAB and the "Health and Safety" basic rules; and Stefania Sandoval, from the Solid State Chemistry group, gave them a talk on "Carbon-based nanomaterials", in which she showed them her reserach in carbon nanotubes and graphene. 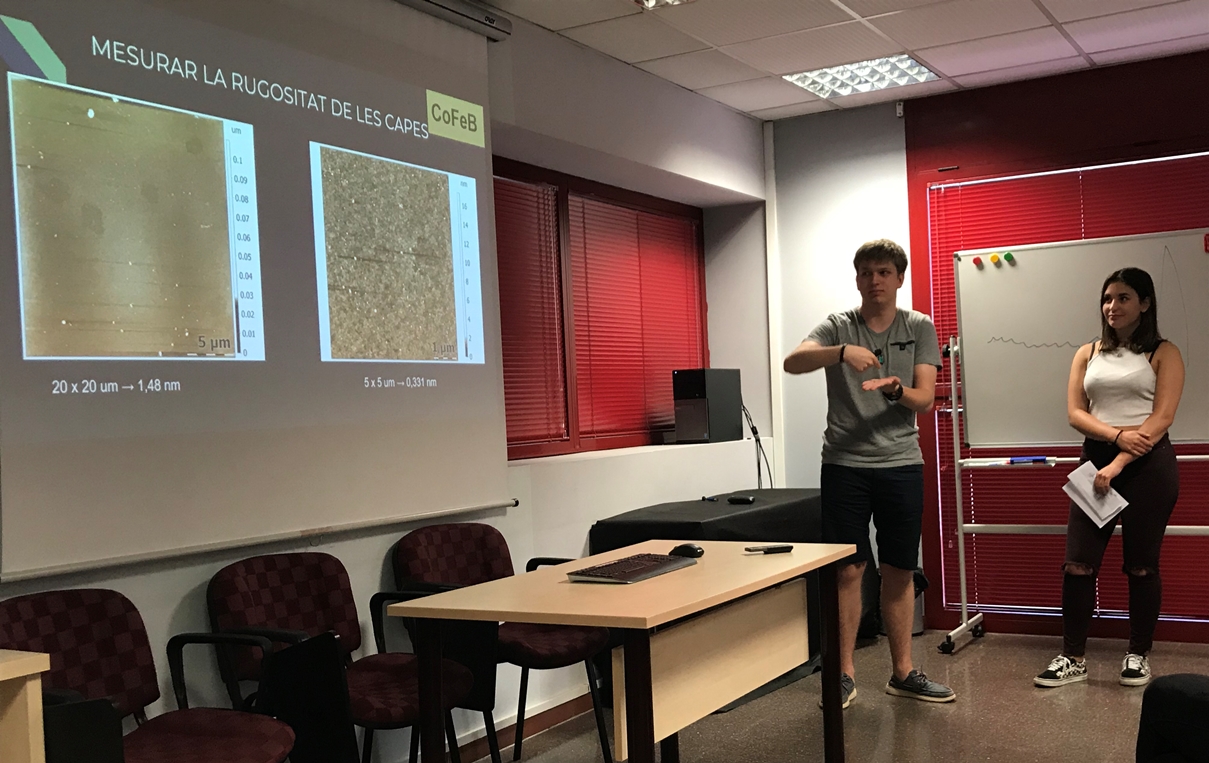 The students, Jose Antonio Garcia (Ins de Badia del Vallès), Abel Belarre (Escolàpies Llúria), Marina López (Col·legi Sagrada Família, Horta) and Gerard Taulats (Ins Daniel Blanxat i Pedrals) come from different places but they all have a common interest: get closer to science and to the world of scientific research. They all want to pursue a scientific carreer, but they still need to decide how to get there.

We hope they enjoyed their stay with us!