Doctor Xabier Rodríguez from the Nanostructured Materials for Optoelectronics and Energy Harvesting (NANOPTO) group at ICMAB will defended his PhD thesis entitled "Development of organic solar cells by combinatorial methods" on Monday, 19 October 2020 in an online session. The PhD Thesis was supervised by Mariano Campoy-Quiles. 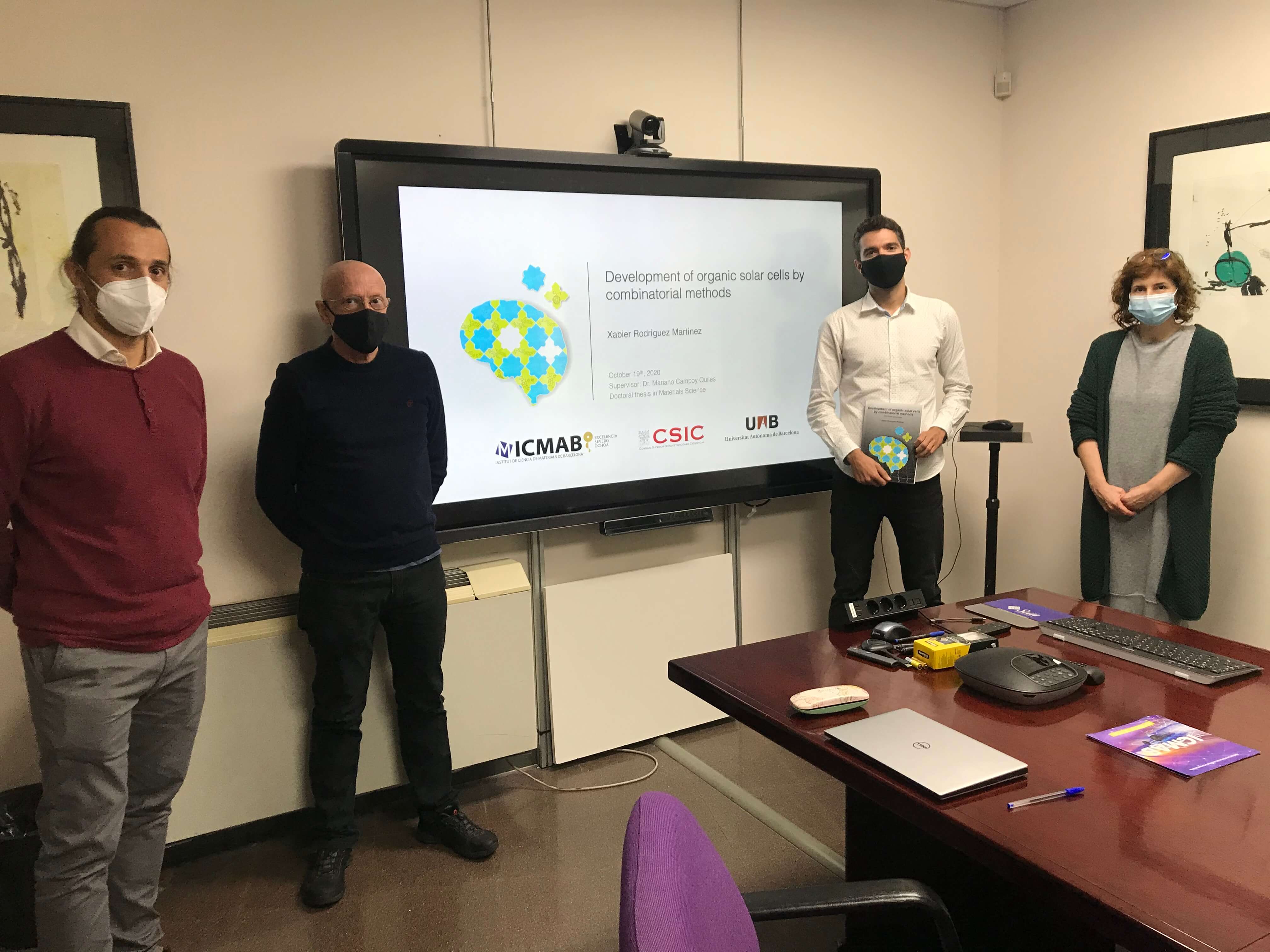 If you want to know more about Xabier Rodríguez, his PhD thesis topic and main applications, some things he could like to have known before starting the PhD and what he will do next, continue reading!

I joined ICMAB in 2014 during my BSc Final Project and I quickly realized that the center had the facilities and resources required to generate cutting-edge research in materials science, especially on energy-related topics which constitute my particular vocation since I was in high school. In early 2016 I found a great opportunity to enroll as PhD student in the NANOPTO group and I did not hesitate for a second. Undoubtedly, it was a great decision.

Our research focuses on accelerating the optimization of organic solar cells. This is done by moving from the traditional massive prototyping of devices with individually controlled parameters to a more resources- and time-efficient approach based on combinatorial science. This approach enables us to rapidly screen photovoltaic devices by generating thousands of data points with minimal effort. Accordingly, we immerse into big data scenarios and implement novel models based on artificial intelligence to accelerate even further the device screening.

We believe that our research will be highly appreciated in both industry and academia when only small amounts of novel photovoltaic materials are readily available to perform a screening study, for example when dealing with a yet unoptimized synthetic route. The methodology we have developed is highly efficient in the use of resources, so by using just a few mg of raw materials we demonstrate that it is possible to perform the corresponding device optimization and evaluate their photovoltaic potential against other materials or device architectures.

I think that during my last years as PhD student I learnt to be resilient and hard worker: I never gave up despite the good results were not coming out. I tried it again, failed again, but failed better, until I got the desired outcomes.

The staff from the ICMAB but more particularly the members of the NANOPTO group: they are all great people always willing to help you in anything they can! I would like to thank them all for their valuable help during these years at ICMAB.

One of the aspects that I appreciate more from my stage as PhD candidate is the progressive development of a critical scientific thinking and the planning of experiments toward the demonstration of certain hypothesis. These are the basic rationale behind the scientific method and they will for sure accompany me the rest of my career.

My plan is to continue a scientific career in academia, starting by doing some postdoc abroad and with the long-term objective of becoming tenure-track scientist in Spain. In fact, I already had the opportunity to send a proposal to the latest call of Individual Fellowships of the Marie Skłodowska Curie Actions, so wish me good luck!

Be resilient and trust yourself. If you work hard, the excellence will finally come out because hard work always beats talent.

During my stage in high school I realized that mathematics, physics and chemistry were by far my favorite subjects since they were as well the most difficult ones (I like challenges!). Then I became interested in scientific dissemination books and blogs, and decided that I wanted to somehow contribute to the field of clean energy production; this is, in fact, the reason why I enrolled in a PhD project on organic solar cells. During this stage, I have had many role models that I deeply appreciate due to the simplicity and originality of their breakthrough ideas, such as George M. Whitesides or Olle Inganäs. Obviously, I deeply acknowledge my mentor, Mariano Campoy, for guiding me during my research experience. 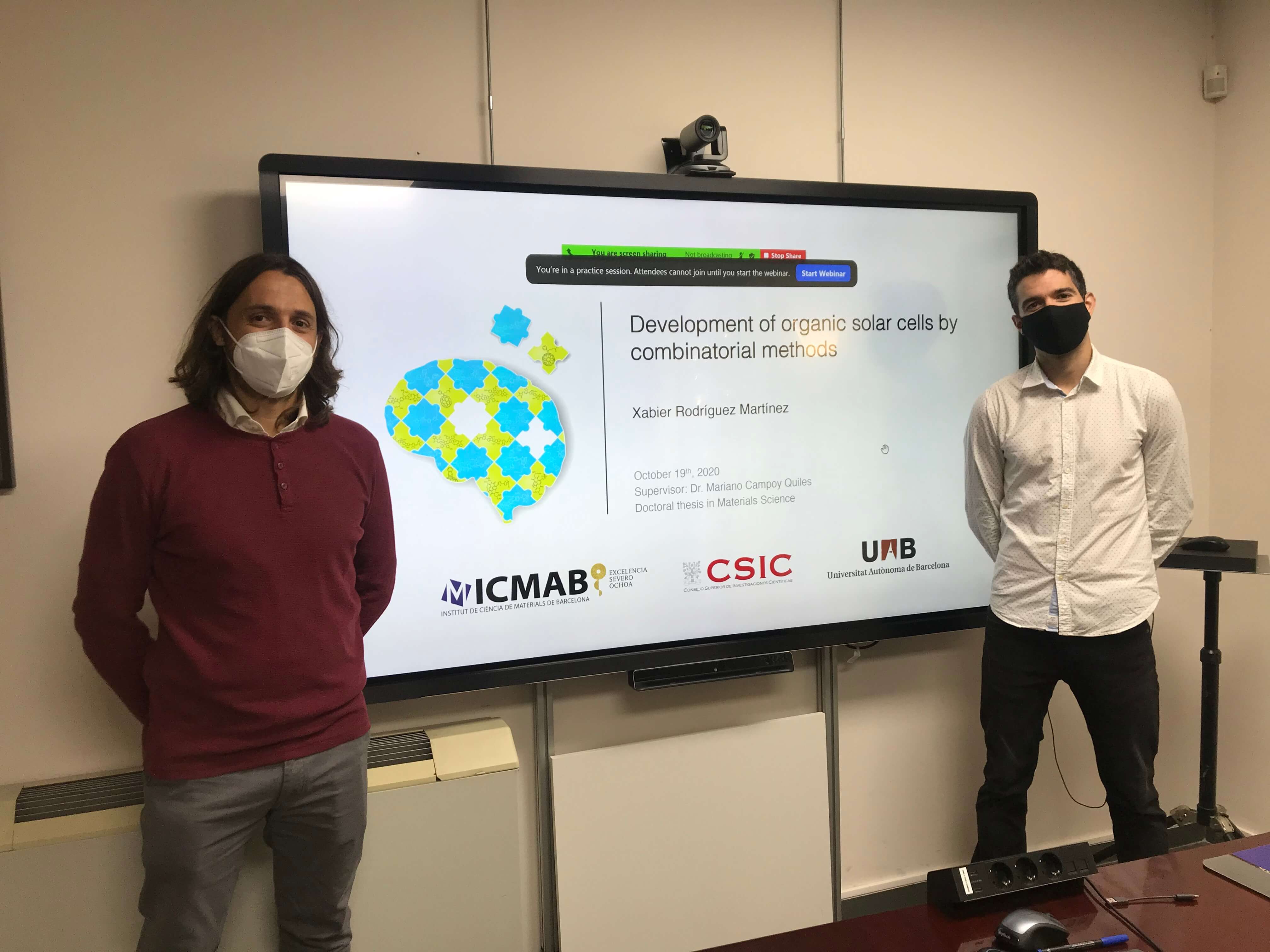