On Wednesday, 12 June 2019, a new session on the "Quantum" exhibition at the CCCB. A session in which the lines of research of the ALBA Synchrotron that use quantum principles, and two experiments carried out, are presented as an example of the possibilities it has in this field. With Salvador Ferrer (ALBA), Gervasi Herranz (ICMAB), and Jordi Fraxedas (ICN2). 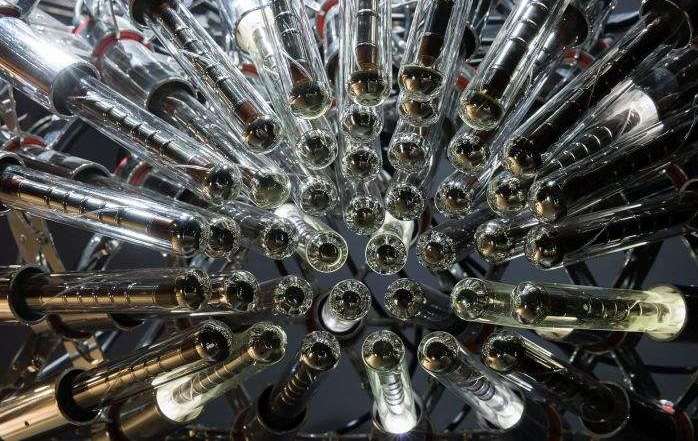 The photoelectric effect, electron spin and magnetism in the Alba Synchrotron.

At the Synchrotron ALBA, quantum mechanics is everywhere. From the moment that synchrotron light is produced, until it is used in the experiments. Synchrotron light is formed by photons of different energies. When a photon with a spin and an electron meet, the interaction is diferent, if they rotate in one direction or the other. This difference is used to understant how magnetic materials are formed and made of, a research area very common at ALBA. Quantum phenomena are the key to understand the results of the experiments.

With Salvador Ferrer, researcher at the ALBA Synchrotron.

How does an electron move in a solid? How does a wave or a particle move? Today, the theory of quantum mechanics describes nature at atomic and sub-atomic scales with an extraordinary degree of perfection. We’ll see how this knowledge can be obtained when we get photons to interact with the electrons of a material in the spectrum of synchrotron radiation X-rays.This journey will help us to understand how quantum mechanics describes the physical reality of the world and how this knowledge can be used for practical applications.

With Gervasi Herranz, researcher at the Institute of Materials Science of Barcelona ICMAB-CSIC, UAB Campus

Nature astounds us with a fascinating spectacle involving a multitude of objects with various structures, forms, movements and colours that we take in with our macroscopic view of the world. But all of these properties come from the microscopic world, invisible to our eyes, which is described by quantum mechanics. One example is ice and its familiar hexagonal symmetry. Quantum physics/chemistry explain how such an apparently simple molecule as that of water (H2O) forms macroscopic hexagonal structures based on the formation of molecular orbitals and the bond between molecules, the hydrogen bond, sharing a hydrogen atom between two oxygen atoms. This molecular structure also explains some of its surprising properties, such as high boiling point and the surprising surface tension of liquid water, the expansion of ice, etc., and its interaction with biomolecules and ions, vital for life (as we understand it). At the Alba synchrotron, we study the electronic structure (molecular orbitals) of water, with its quantised or discrete (hence the title) energy levels, and we’ll be offering a short, easy-to-understand analysis. But water still has many mysteries that quantum theory will help us to solve.

With Jordi Fraxedas, researcher at the Catalan Institute of Nanoscience and Nanotechnology (ICN2), CSIC and BIST, Campus UAB, Bellaterr