Barcelona in the top 50 Science Cities in Nature Index 2020

The Nature Index 2020 Science Cities was released this September 2020, and is based on the research papers published during 5 years (2015-2019) in 82 international journals of high quality research, chosen by an independent group of researchers. In the general ranking, we find that Barcelona and its metropolitan area is in the position number 40, within the top 50 Science Cities of the world. Congratulations to all researchers in the Barcelona area who make it possible! 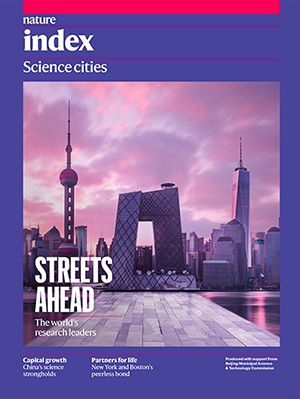 It is also interesting to note that the science production in Barcelona and Madrid represents 25.4 % and 24.1 %, respectively, of Spain's total production, according to the data gathered by Nature Index.

Among the top 10 science cities, there are 5 cities from the USA (New York, Boston, San Francisco-San Jose, Baltimore-Washington, Los Angeles), three from China (Beijing, Shanghai and Nanjing), one from Japan (Tokyo) and one from France (Paris).

The Nature Index 2020 Science cities supplement is based on data from natureindex.com, covering articles published from 1 January 2015 to 31 December 2019. The analysis uses article share (Share) as the primary metric, with time series figures adjusted to 2019 levels. Each city’s Share is calculated by summing the Share of affiliated institutions located in the city. For institutions spanning multiple cities, such as CAS, entities were assigned to the city where they are located.

For a selection of the most populous conurbations with significant output in the index in the United States, Canada, Japan, South Korea, India and Europe, we defined boundaries of metropolitan areas based on official specifications from census bureaus, statistical offices, government offices, or as described in legal documents. The specifications typically group adjacent areas that have a high degree of social and economic integration, as measured by commuting ties. When an important institution with strong connections to institutions in the city was situated just outside the metropolitan area we adjusted the boundary to encompass the institution.

For more information about the top science cities, you can read the articles in the supplement Nature Index 2020 Science Cities.

The last data from the ICMAB in Nature Index corresponds to the preriod between mid-2019 and mid-2020, and you can find it in our previous article "Nature Index 2020 places the ICMAB in the top positions among the CSIC centers".