The difficulty in accessing the inner parts of the Earth implies an absence of direct experimental studies on minerals and compounds that control geodynamics and geomagnetism. The Earth is mainly made up of six elements: magnesium, aluminum, silicon and iron, in combination with hydrogen and oxygen. Therefore, all the studies on materials that contain these elements in the appropriate conditions can open new ways of research that dig in the mysteries of the interior of the planet.

Now, a team of researchers from the Polytechnic University of Valencia (UPV), the Institute of Materials Science of Barcelona (ICMAB-CSIC) and the European Synchrotron Radiation Facility (ESRF) has conducted a study, published in Nature Communications, which reveals that the epsilon phase of iron oxide (until now considered rare) can be found in the inner layers of the Earth.

In this work, the researchers have characterized the structural, electronic and magnetic behavior of epsilon-iron oxide nanoparticles under extreme pressure conditions. This treatment has led to the discovery of the new phase, epsilon prime, with magnetic properties unknown to date. 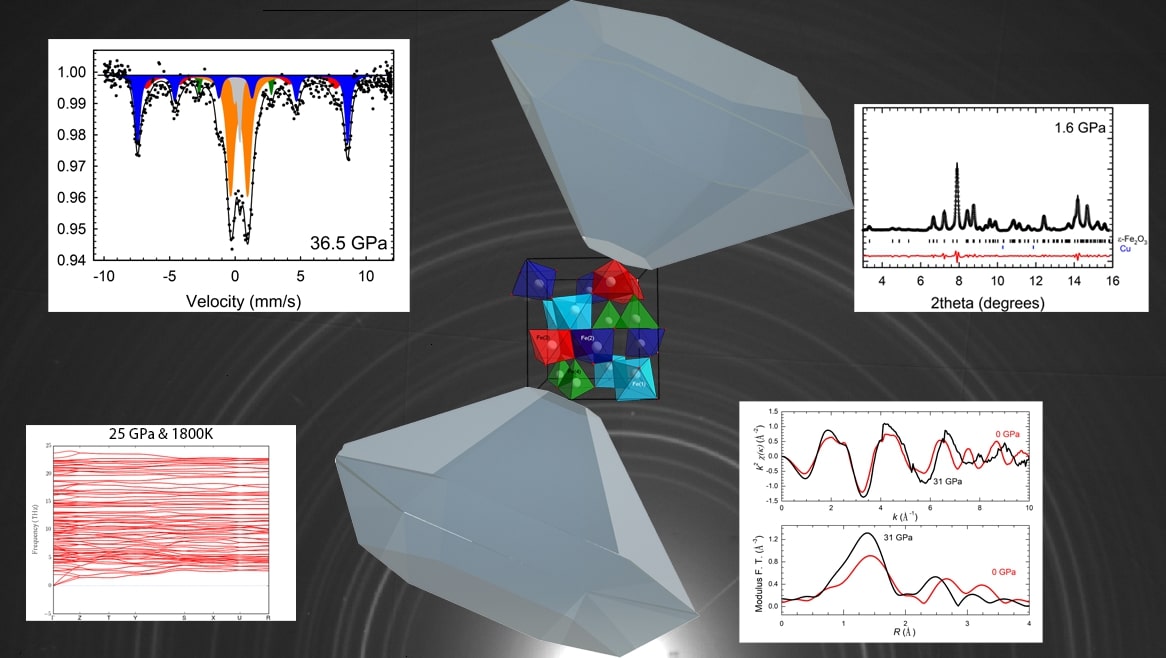 Figure: Representative image of the different measurements and calculations that have been made on the nanoparticles of the epsilon-Fe2O3 phase.

"From the geophysical point of view, this finding is very relevant. It opens the door to the fact that the epsilon phase can be found inside the Earth. On the other hand, a new iron oxide phase (under high pressure) that contains magnetic properties different from those that can be obtained at the moment has been discovered. And having a material with these properties would make it necessary to modify the geodynamic models we know", says Juan Ángel Sans, Ramón y Cajal researcher at the EXTREMAT group of the Institute of Design and Manufacture (IDF) of the Polytechnic University of Valencia.

"We were surprised that the epsilon phase was that stable at such high pressures, up to 27 GPa, and that above this pressure this new phase, whose magnetic properties we still do not know well, appeared" says Martí Gich, researcher at the ICMAB-CSIC. "This stability at high pressures indicates that the incorporation of high proportions of other elements in the epsilon phase should be possible, and to control its properties and benefits," he adds.

The results of the study developed by researchers from the UPV, the ICMAB and the ESRF allow to complete the vision of the behavior of iron oxide and indicate that the presence of this material in the interior of the Earth is possible.

The study was funded by the Ministry of Science, Innovation and Universities, the Generalitat of Catalonia, and the Severo Ochoa project of Scientific Excellence of the ICMAB-CSIC.

Cover Figure: Representation of how the number of oxygens that surround one of the irons with the pressure changes.

Download the press release in ESP, CAT and ENG.