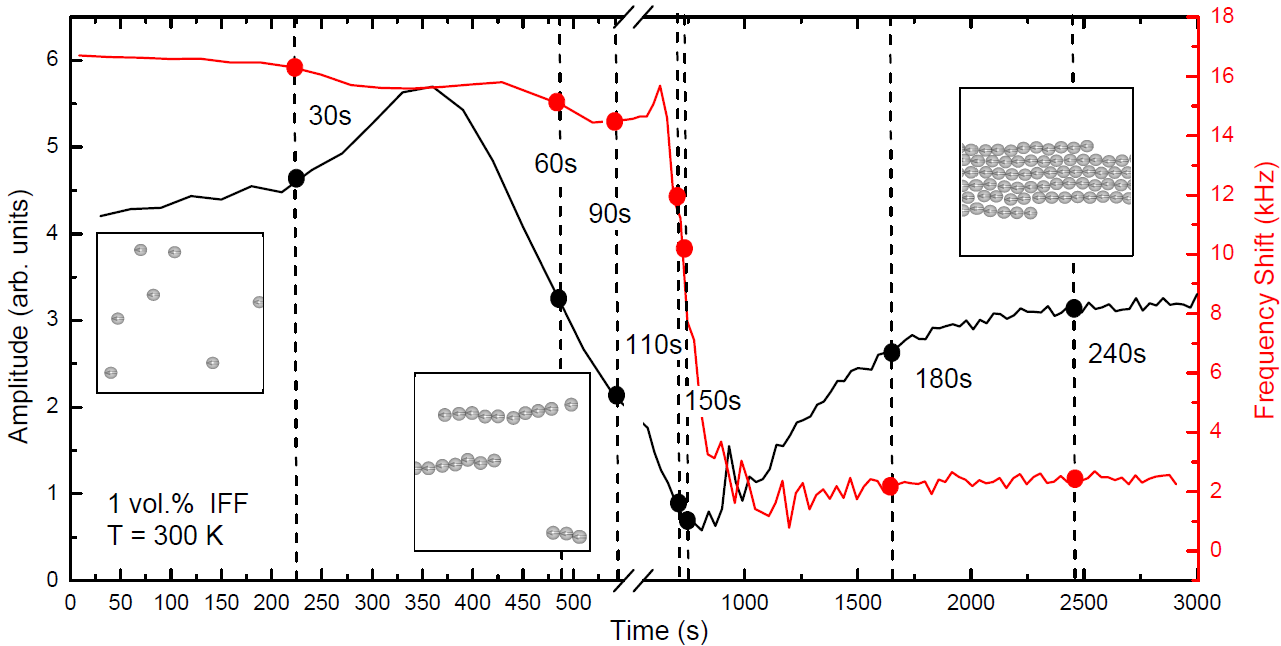 We have used low-field 1H nuclear-magnetic resonance (NMR) spectroscopy and molecular dynamics (MD) to investigate the aggregation dynamics of magnetic particles in ionic ferrofluids (IFFs) in the presence of magnetic field gradients. At the beginning of the experiments, the measured NMR spectra were broad and asymmetric, exhibiting two features attributed to different dynamical environments of water protons, depending on the local strength of the field gradients. Hence, the spatial redistribution of the magnetic particles in the ferrofluid caused by the presence of an external magnetic field in a time scale of minutes can be monitored in real time, following the changes in the features of the NMR spectra during a period of about an hour. As previously reported [Heinrich et al., Phys. Rev. Lett., 2011, 106, 208301], in the homogeneous magnetic field of a NMR spectrometer, the aggregation of the particles of the IFF proceeds in two stages. The first stage corresponds to the gradual aggregation of monomers prior to and during the formation of chain-like structures. The second stage proceeds after the chains have reached a critical average length, favoring lateral association of the strings into hexagonal zipped-chain superstructures or bundles. In this work, we focus on the influence of a strongly inhomogeneous magnetic field on the aforementioned aggregation dynamics. The main observation is that, as the sample is immersed in a certain magnetic field gradient and kept there for a time τinh, magnetophoresis rapidly converts the ferrofluid into an aggregation state which finds its correspondence to a state on the evolution curve of the pristine sample in a homogeneous field. From the degree of aggregation reached at the time τinh, the IFF sample just evolves thereafter in the homogeneous field of the NMR spectrometer in exactly the same way as the pristine sample. The final equilibrium state always consists of a colloidal suspension of zipped-chain bundles with the chain axes aligned along the magnetic field direction.